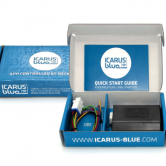 Always Ready to Use

Over 2.3 billion people use a smartphone worldwide. Statistics say, that by the year 2020 it will be nearly 2.9 billion people. So why use an external control system when you usually carry the control unit in your pocket?  With the free ICARUS blue app, the four separate outputs of the receiver can be controlled easily and intuitively from your smartphone and configured in various ways.

ICARUS blue is an app-controlled wireless receiver, with impressive features such as a compact and sturdy design, a legion of universal application possibilities and a low purchase price. In conjunction with the free “ICARUS blue” app (for Android and iOS), the user is able to control a maximum of four separate outputs (per ICARUS blue receiver) from a mobile smart device and configure them in different ways Whether it comes to the control of winches, gates, dumper truck covers, doors, lighting, extending and slide-in systems, various hydraulic applications or electric motors of any kind - there is almost no limit to your ideas as long as used within the boundaries of the system specifications.

Thanks to the included cable, the “Quick Start” guide, the App Setup-Wizard, and the intuitive menu guidance and handling, the assembly, connection, teaching-in of smartphones & receivers (up to 24) as well as the configuration and control of the ICARUS blue is really easy.

For a demonstration of the ICARUS blue in action check out these YouTube video:

You can also find us on: